You are at: Planned Giving > Gift Options > Donor Stories

How One Man Sows Seeds for God's Kingdom 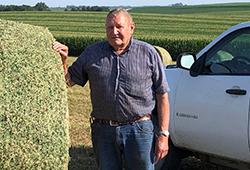 Lyle Gansko is no stranger to hard work. When he was 16, he started helping a local farmer with his daily chores. It wasn't long before Lyle worked multiple jobs-raising hogs and cows as well as farming corn and beans. He eventually saved enough money to buy the farm he started working on as a teenager.

Over the years, Lyle's hard work has continued to pay off; today, he owns eight farms in northern Iowa. But diligent work and financial success have never been the primary focus of Lyle's life.

"I believe the main reason we're here is to help spread the gospel to people who haven't heard it . . . who don't have a Bible."

Living out that conviction, Lyle has faithfully supported American Bible Society for many years. He has also thought a great deal about how his estate will further God's Kingdom on earth when he is no longer here to steward it. That's why Lyle helped us pioneer the Kingdom Endowment-a fund in which American Bible Society shares proceeds from an estate with other charities for up to 20 years.

For decades, Lyle has written checks to about 60 charities. Through the Kingdom Endowment, American Bible Society will continue to write Lyle's monthly checks for decades to come.

Lyle's priorities remain eternal. As he puts it, "I would rather see it further the Kingdom of God."

You can obtain more information about the Kingdom Endowment, estate planning and other gift planning options from American Bible Society's Regional Director in your area by calling our Gift Planning Office at 1-800-549-3328, or by visiting us at absgift.org.